Week 7 – I mean where is the time going?
I am actually finding that we have settled into a bit of a routine and the days are going really quite quickly.  I’ve been utterly awful at keeping in contact with people, thank goodness people call me or I would be a complete Loner.  Thank You to those friends and family who have kept that contact going, it really means a lot, I have absolutely loved all the phone calls, text conversations and video chats. I wish I was that person that picked up the phone but I tend to get all caught up in trying to keep everyone happy at home then think oh they’ll be busy or they’ve got better things to do than chat to me right now.  Which is silly I know but then the time has passed and something else is going on.

Anyway this week I got creative.  LB was having a bit of a pants week of homeschooling but Friday 1st May was the BookTrust Pyjamarama and although it all went a bit wrong as their website crashed, we joined in a  few drawing activities during the day and me and LB enjoyed something together, which can sometimes be a challenge as Daddy is the firm favourite there at the minute (and he makes it very clear). Here is my Rob Biddulph Gregosaurus picture – I was actually very proud of myself and wanted to try more so Nancy was next! 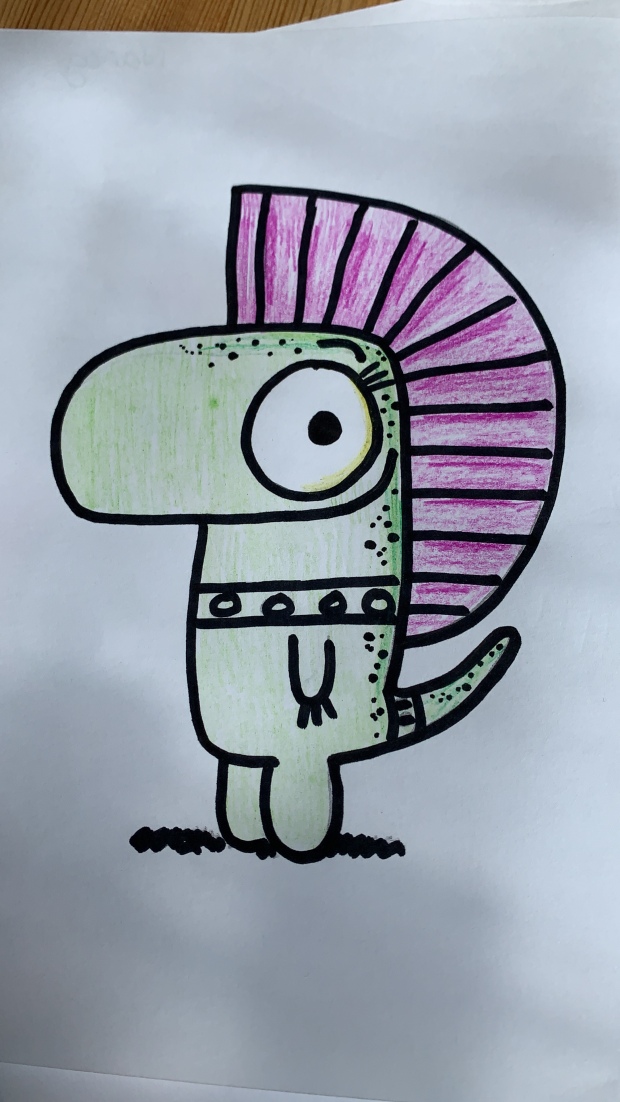 Food has been an interesting one this lockdown.  We have tried some new recipes which haven’t always gone down well.  P will generally try anything but LB is not so easy going if something is new.  However as you can see Spag Bol is still a firm favourite!

On Saturday a good friend of mine, that I worked with in a show in Tenerife back in my early 20’s, performed his drag act on a Facebook Live.  He used to do this act when we lived abroad but Miss Candy Floss has not come out for many many years.  We all got ready with our gins and then our group of friends started a Video Chat where we drank and giggled our way through his show.  He joined us at the end and it was just the best reunion and a wonderful way to spend an evening.  I was still chatting to one of the girls at 230am and man I did not want to get up the next day but my heart was full! 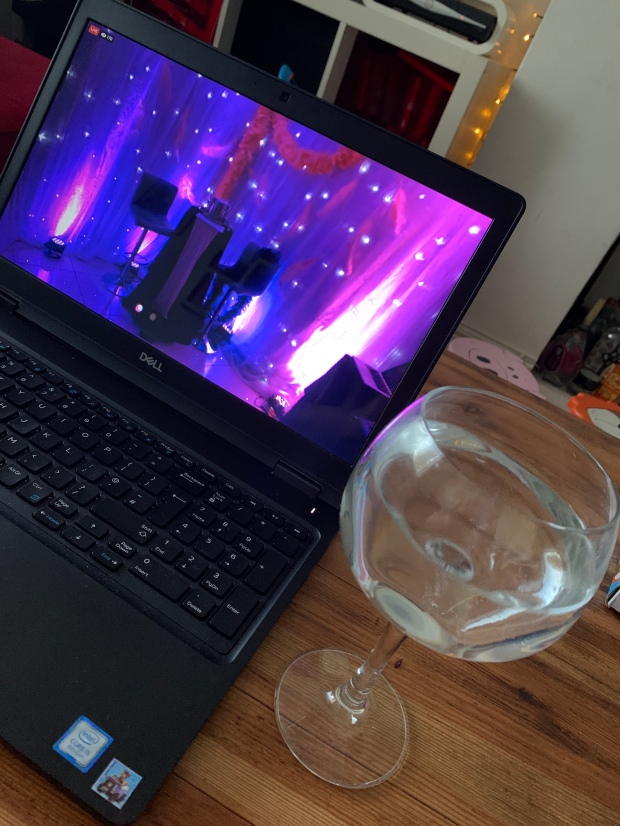 Good job the next day was Sunday and this one was happy to snuggle next to me in bed with his toast. I was able to drown my tiredness and hangover in giant cups of tea while watching Disney.

We are so lucky to have such great friends.  We have a family that I have been friends with since I took over my dance school 13/14 years ago and the girls are like big sisters (17/19/24yr old big sisters) to the boys.  The younger two are currently at home and have been keeping my boys entertained with challenges, sending letters and presents and playing games via video calls and its been saving me.  This week we got a phone call to say there was a package on the door step.  They had put together a craft box……envelopes filled with different projects all set up ready, games, books and honestly I wanted to cry.  It was so thoughtful.  There was little notes and a little teddy in there called Marvin so they could take photos of each craft and send it back to the girls to show what they had been doing. The boys couldn’t believe it and I felt so lucky.

First craft challenge, make your own caterpillar and race them by blowing them with a straw to make them wiggle up and down. Easier said than done and a complete giggle when we got them all going. 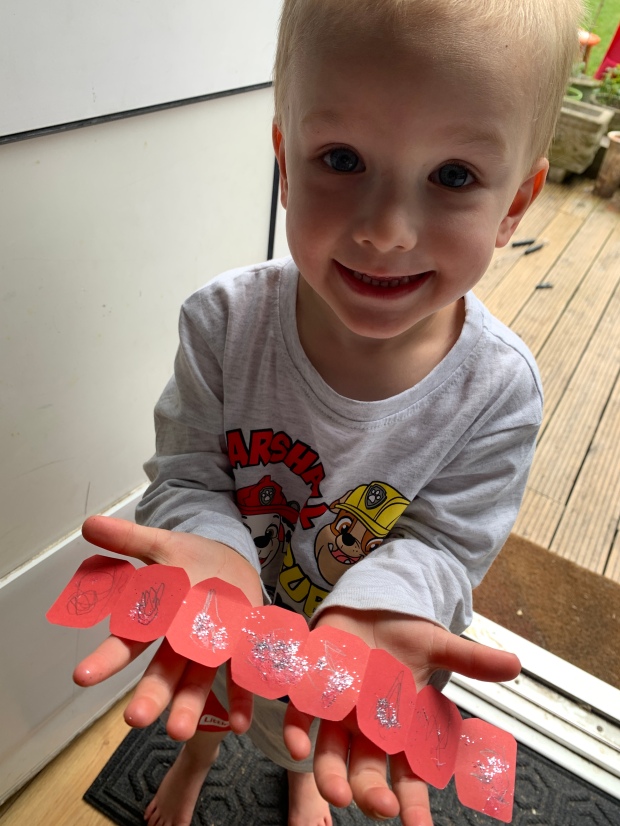 A little more photography practice.
Considering I do them all on my phone I’ve been impressed with the quality of some of the photos I have taken.

Some days there’s nothing better than a hot soak in the bath.
Only problem is I honestly struggle to stay awake.  I take my book and I almost always end up waking up in a cold bath with a book on my face.

Cant quite believe it but some of our seeds are actually growing.  In fact most of them.  We think the top of the mini greenhouse must be a bit hot as the seeds we put up there seem to be the ones that haven’t done quite so well. The boys have loved watering them and checking on them every few days.

P has started to enjoy sitting down to do a bit of ‘work’ with us in the mornings.  He is really getting to grips with a pen and is getting better at following along the dotted lines in his writing books.

The boys decided this week that they wanted to start watching the Jurassic Park films. They are both Dinosaur mad so we thought we’d give it a go.  Oh my goodness I think they are now hooked.  We watched all 3 in the space of a week. The first one we had a proper movie night with popcorn and PJs and a late night so it was extra special-to be honest I’m surprised they slept after all those scary dinosaurs but they just thought it was amazing. 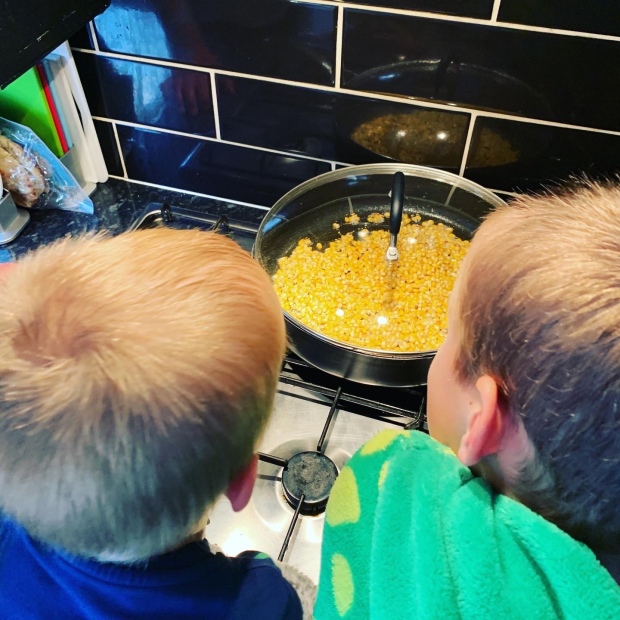 We have had a spare room that was going to be an office for over a year now.  It was P’s nursery but when he moved into a bunk bed with his big bro we thought we might finally get the office that two self employed people could do with. However it quickly turned into a junk room.  Everytime I got in there and sorted bits out it would end up back in a state within days-a real dumping ground.  Well Lockdown has given me a bit more time and I have cracked on with it and it’s now mostly clear.  We sit up there and do work and yes there are still a few boxes of crap or paperwork to sort but the fact that we can walk into it without falling over anything and use the exercise bike that’s been in there trapped under stuff for so long is just amazing!  I hope I can crack on and get the rest finished before life goes crazy again.  I mean I even started organising our accounts (which doesn’t usually get done until Nov).

I have been struggling more with my 7 year old who seems to have become a teenager over night.  He’s been pushing the late nights, the tech time, the needing someone’s attention 24/7, the telling everyone what to do, lack of manners etc and some days it all gets a bit much.  I have been trying to spend some one on one time with him, set him some boundaries, give him rewards for good behaviour and some days are great but I am feeling a bit sad at the rate he’s growing up I must admit.

LB has started to express he may want to go vegetarian at some point. We’ve been spending a lot of time talking about nutrition and the foods that are good for you.  He has started to cook with us and understand more about what a healthy diet is etc and he has started to choose not to eat the meat in some of his meals.  We don’t eat meat every night, though as I’ve said in recent blog posts it has started to creep in a little more than we like.  This is due to only shopping once a week and not being able to keep all the fresh veg, well fresh! This meal was a choice of his and he loved it. Potatoes, celeriac, carrots, eggs – it was Jamie Oliver’s Florentina Traybake and a recipe we will definitely be doing  again.

I made some more bread this week and seriously steak sandwich was the way to go!

The boys have been heading out into the garden or over to the park for a game of football after dinner.  I must admit the kids definitely go to sleep a bit easier on the nights that they do this.  Nothing like wearing them out nicely.

He might only be 7 but man does LB love a computer game – whether its on the PS3 or Wii U or to be honest even his kindle fire.  This is his reward for good school work or good behaviour but he could honestly spend all day on it if we allowed him too.

Off on his own-its been so lovely to watch his confidence grow with riding his bike.  I’m hoping he can get out with Daddy somewhere other than this bit of grass soon to see how he is going further. 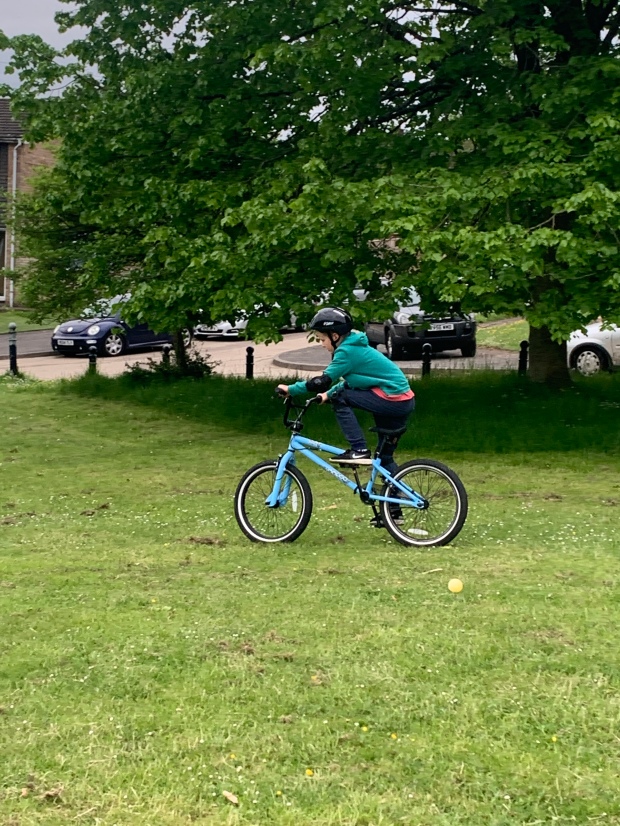 I honestly can’t believe how fast the weeks are going.  We have settled into a bit of a routine now and although yes sometimes it goes out of the window its been keeping us going.  I thought the days would drag but they are actually flying by (most of the time) and although it is a little like groundhog day I’m trying very hard to take pleasure in the little things.