Our Family Diary through Week 3 of our Lockdown at home.
The moments that have kept us going amongst the meltdowns, frustrating times, homeschooling and trying to be productive and positive.

This week is supposed to be the Easter Holidays.  We had plans to get outside enjoy walks and picnics with friends, catch up with family and easter egg hunts galore.  Things are a little different though. Easter Hols mean I’m not sending schoolwork out to the students at the school I work at but we decided to try and keep the school routine going for our kids except the 4 day Easter Weekend as we thought it might be harder to get back to a routine after a long break. I mean it’s hard enough when they are actually at school. 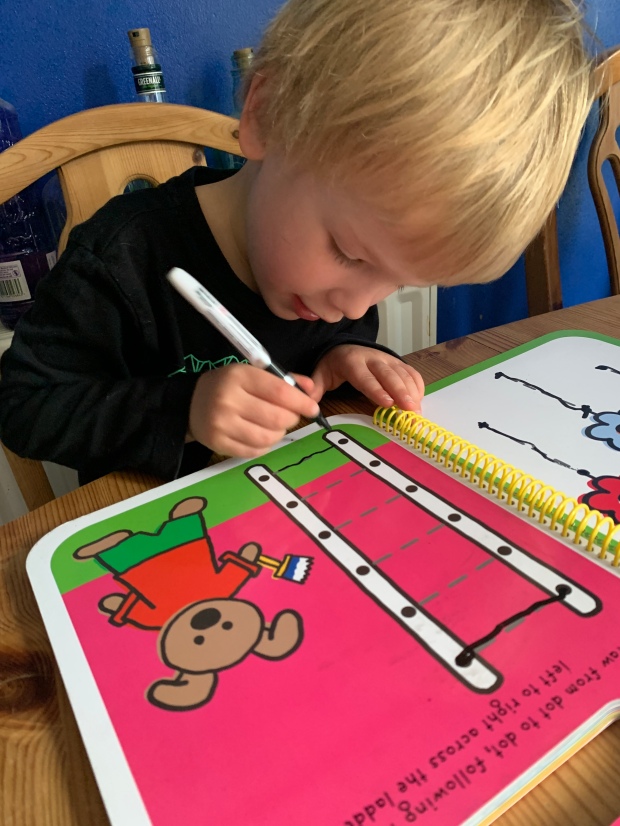 Its a lot easier to set work for the older one. P goes to preschool but he’s only been there a few months and it’s all about the imagination and moving around.  He doesn’t have a huge amount of patience for anything that means he has to sit still for too long.  This week I’ve tried to get him involved a bit more at the table with some stickers and teaching him to hold a pen correctly, which he has taken to surprisingly well-now all we say is “are you holding that correctly” and he’ll change his grip if he isn’t. 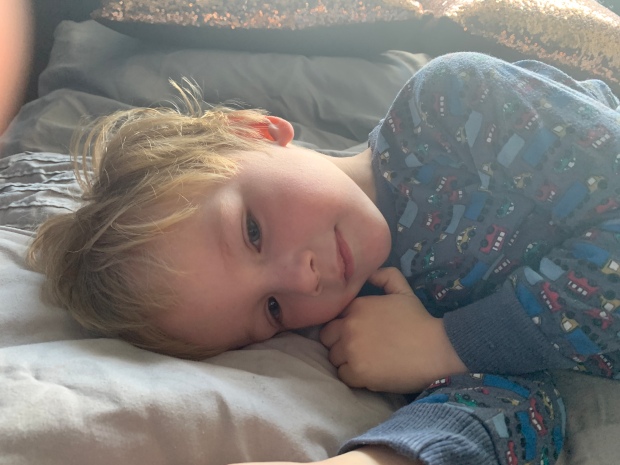 We’ve had lazy days where getting out of our PJs was an effort and other days where we got out for a Family Walk.  I’ve loved heading out to get some fresh air and to explore our local woods.  We text a friend and they looked at us through binoculars from their house and flashed a torch at us while we waved. It was nice to feel a bit of connection. 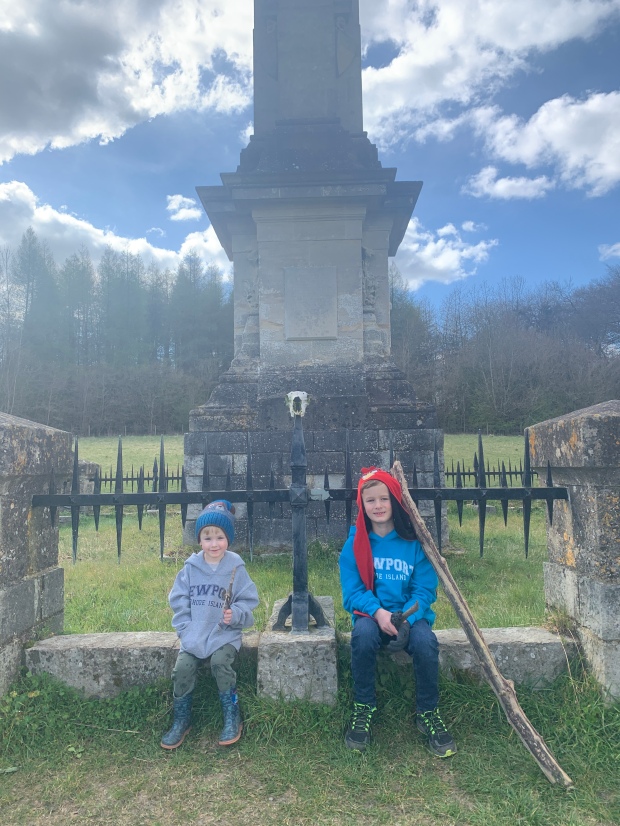 Some people had chalked on the trees in a little area and it was lovely to see some colour and positivity being spread.  The kids loved exploring that area. 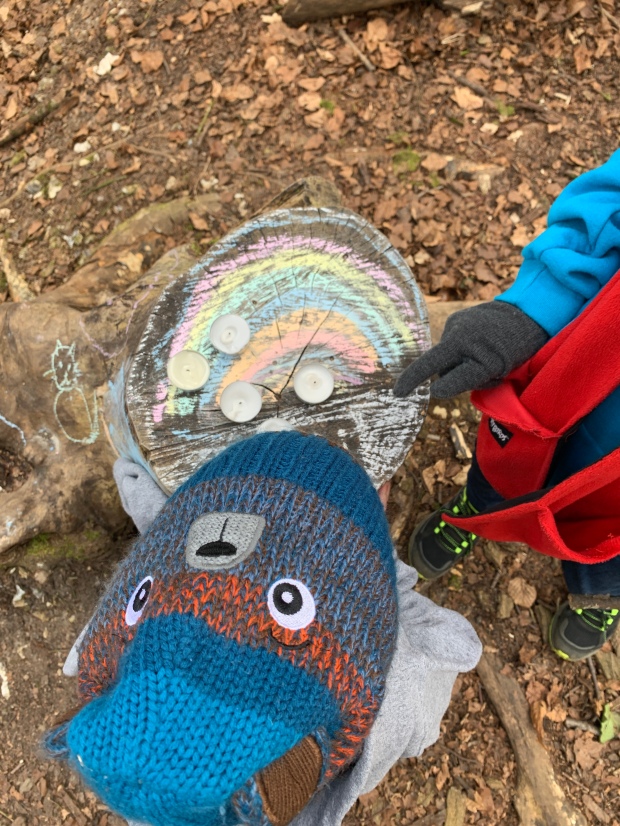 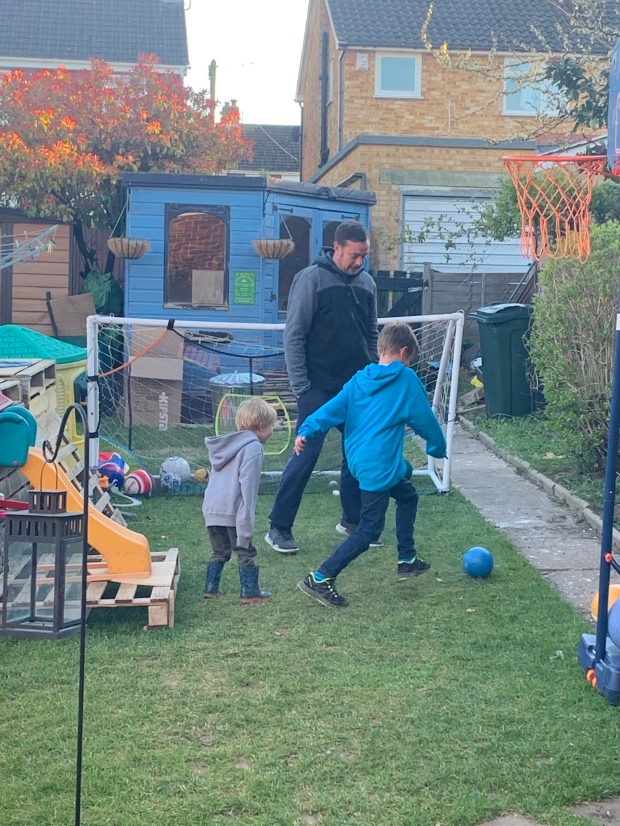 There’s no issue with the boys getting in enough exercise.  They have been running around outside playing football and chasing each other constantly. Joe Wicks PE has fallen by the wayside a bit unfortunately but hoping to get back to it soon.  I have now started a 30 days yoga challenge with Adrienne as although I used to be  really quite strong and flexible before kids I certainly am not now and to be honest who couldn’t do with a bit of zen right now. 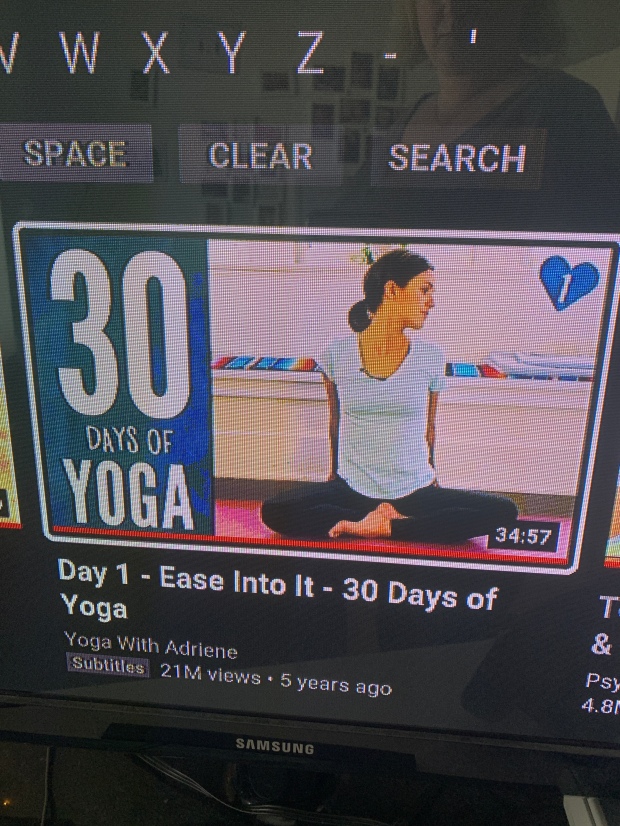 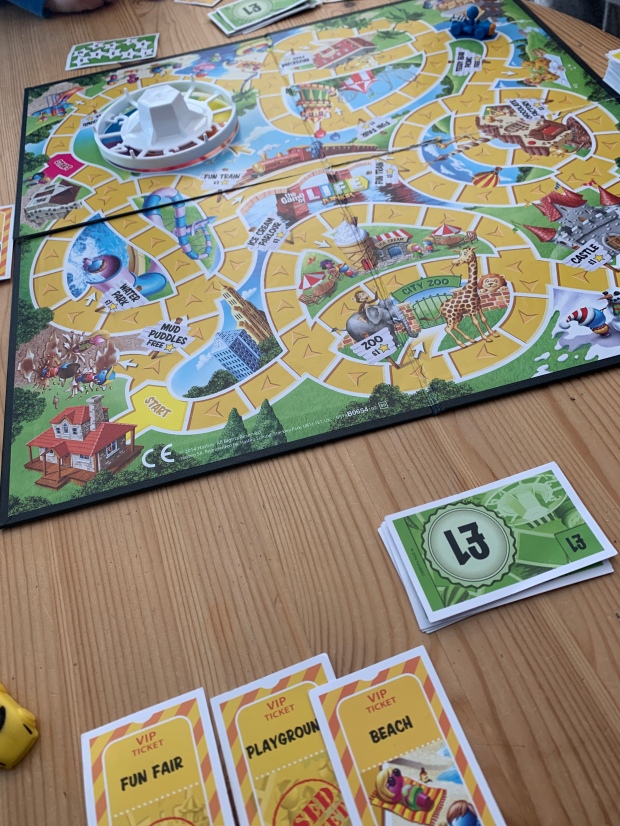 Most of the time my boys need full on attention.
The eldest especially has never been great at getting on with things himself. He’s the one that says he’s bored and you give him ideas and he just says no and then spends ages following you around. He’s perfectly happy as long as you are there keeping him entertained-playing games, kicking a football with him, sat next to him at all times. It’s a little frustrating. The youngest is a little better at getting lost in his own imaginary world but they certainly like to talk about what they are doing constantly. Its like a running commentary of their every move.
The only time they are both quiet is if they are playing on their Kindles or watching a programme they like. Put on a film and guaranteed they’ll talk through it though. 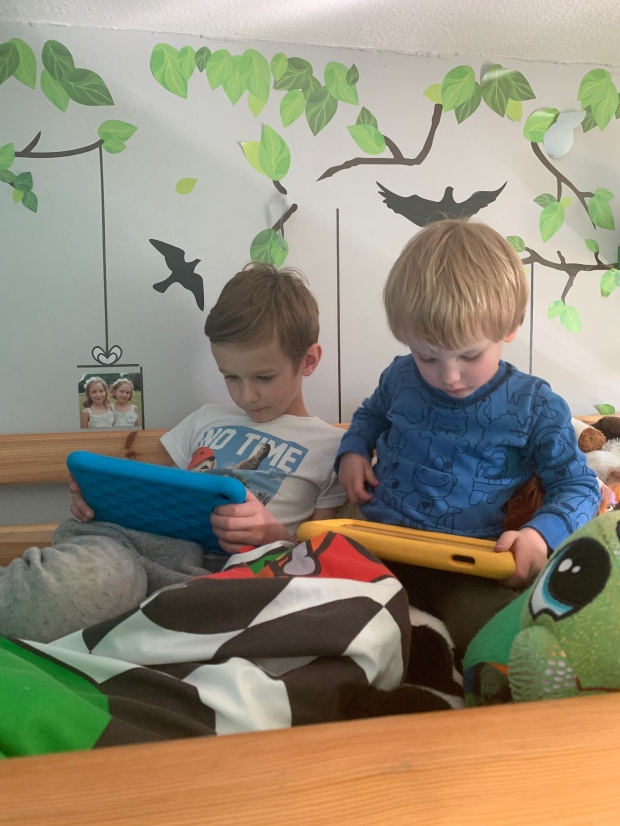 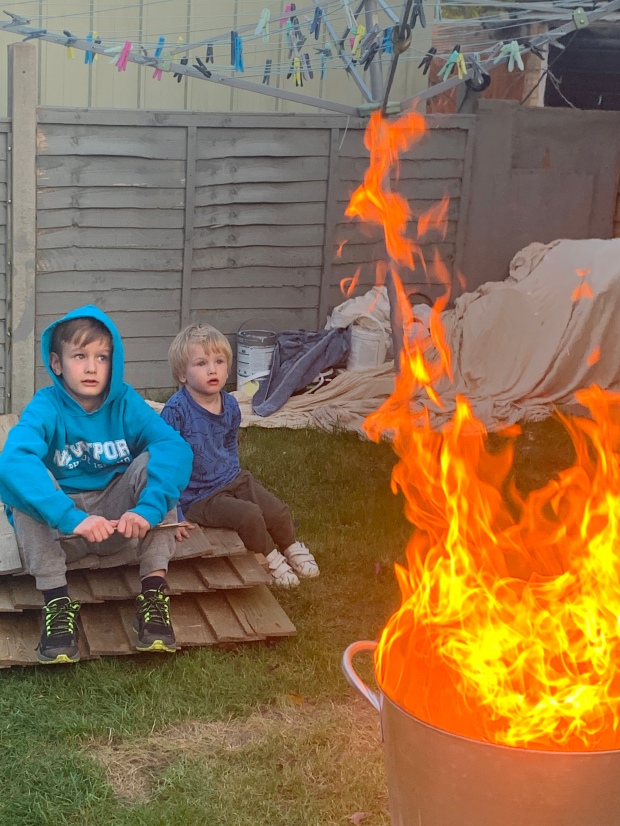 We had a little bonfire on one night to get rid of all the wood and fencing we had ripped out while clearing out the garden.  The boys stayed up late and thought it was amazing. I swear they both seem to be growing up so quickly at the minute. 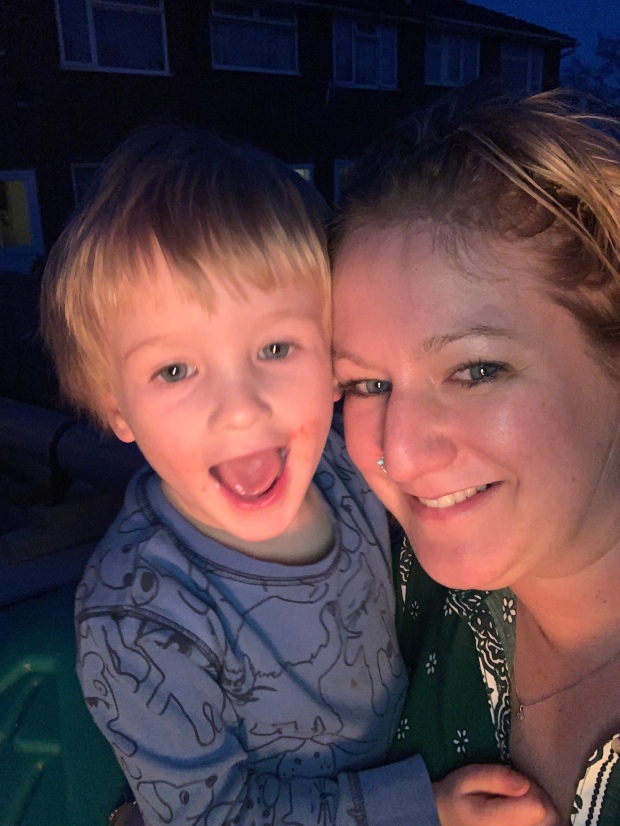 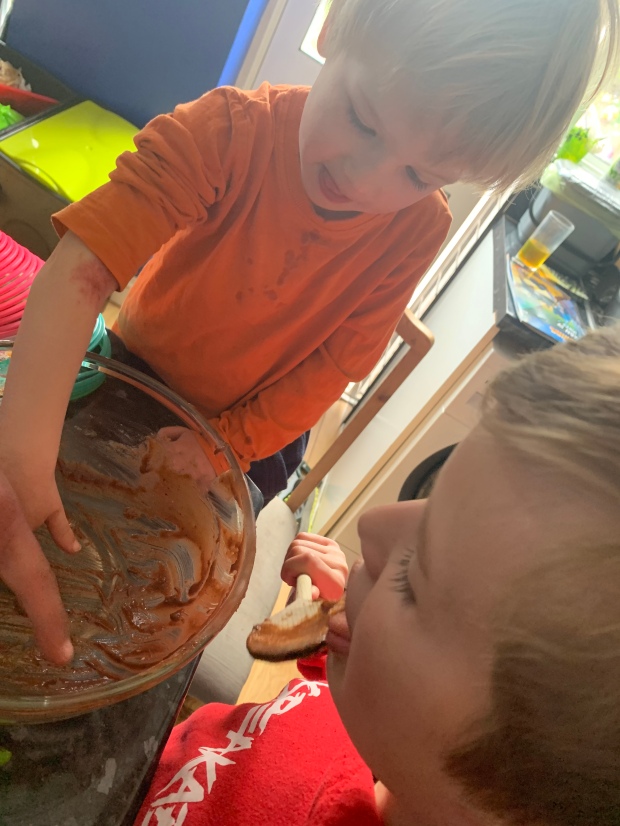 It was my Birthday on the 6th April so the boys helped me bake a chocolate orange brownie Birthday Cake from my friends cookbook There’s Always Cake in my House.
I mean for someone who really isn’t a great baker I’m able to make the majority of these recipes pretty easily – even if they don’t look as good as hers they taste amazing. 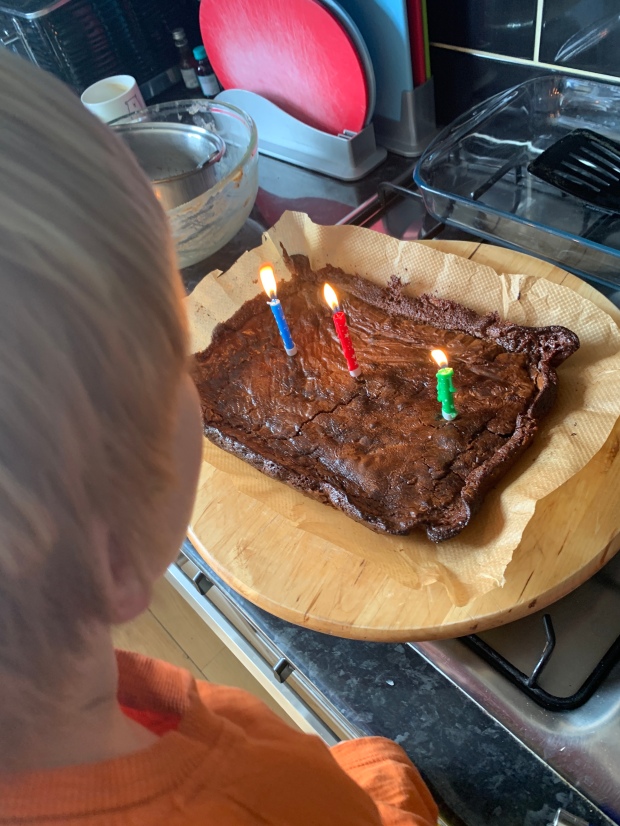 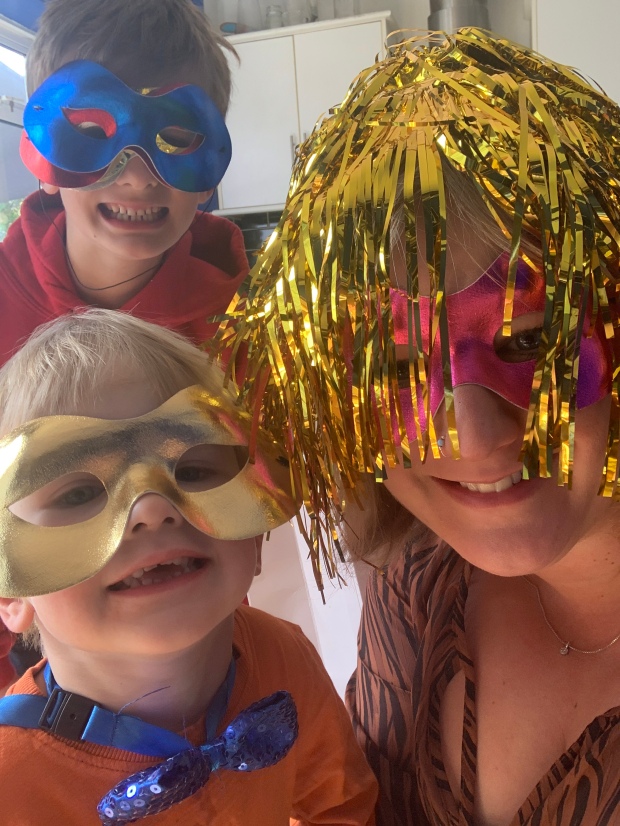 We threw on some party outfits to celebrate and after a failed food colouring and milk science experiment fell back on the classic skittles one. 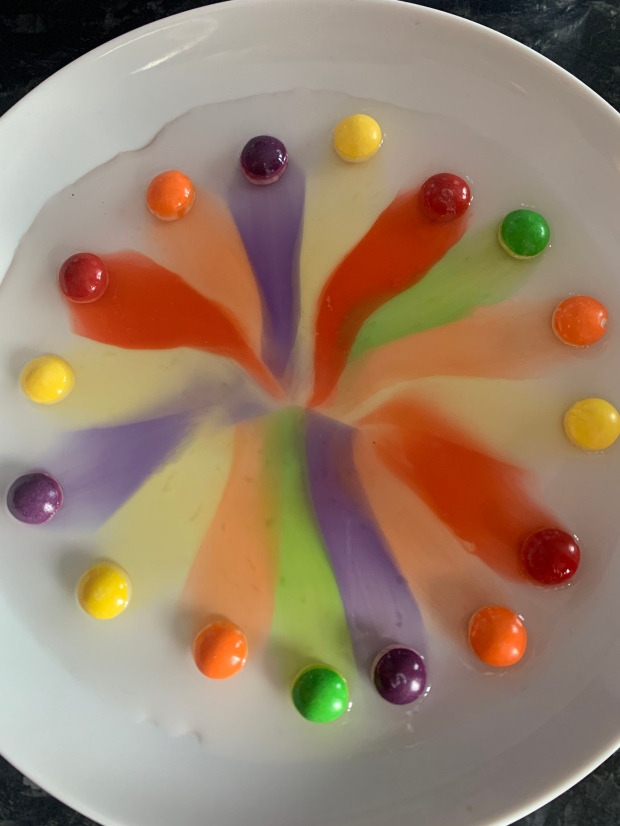 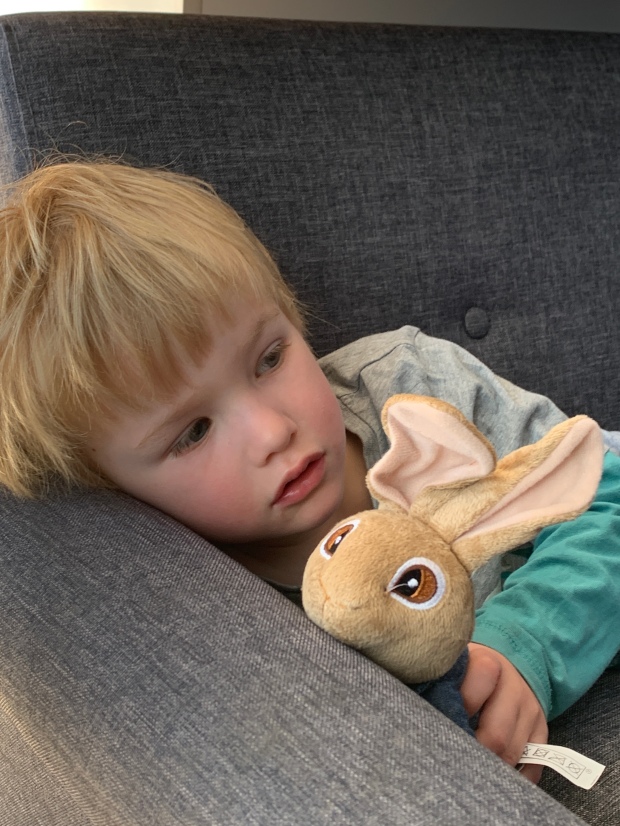 P received a Peter Rabbit Easter Egg and loved the little cuddly toy that came with it and is a new favourite I believe.  LB usually loves to read but I have noticed since we’ve been in lockdown he’s stopped and has been listening to more audio books and podcasts.  It was really nice to capture this picture therefore and this was because he’d taken himself off to read as I’d challenged him to finishing his book. 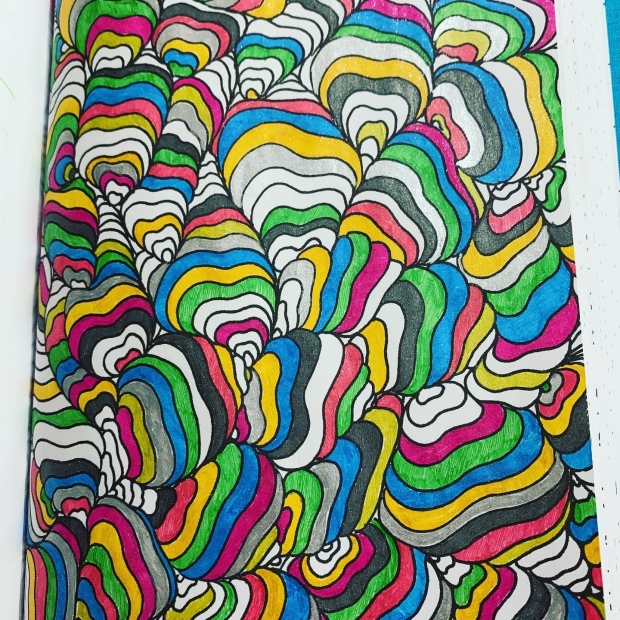 I’ve been trying more to let the boys see what I enjoy eg reading or colouring rather than saving them for when they are in bed.  I’ve been taking little moments in the day to do these things rather than trying to keep boys entertained all the time which is just exhausting and silly and the lovely thing is LB has tended to come and join me. 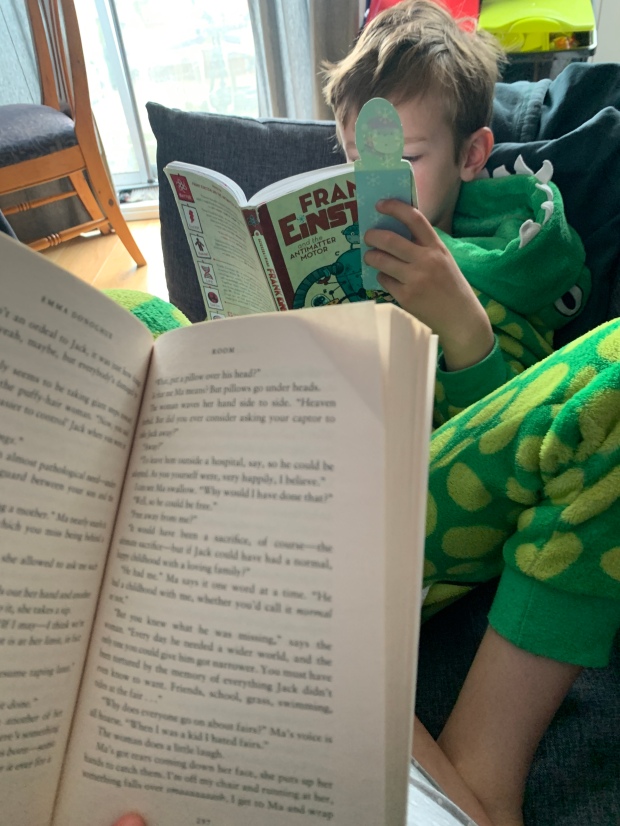 I’m sure you’re all in the same boat but man my kids are eating constantly!! So I’ve been trying to find different recipes to make with them so they have different things to  snack on.  We tried making frozen yoghurt bark this week and although its very tasty it wasn’t the easiest to eat as so cold but quickly melts.  Not sure if I’d got it completely right but everything is worth a try to keep us entertained and fed. 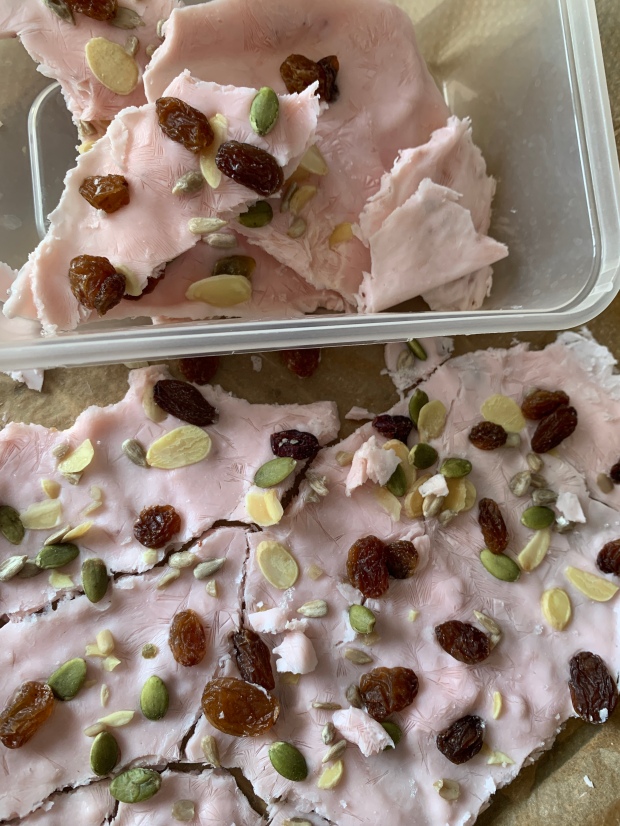 Last Weeks haircut threat became a reality.
We knew that LB wanted to do it when Daddy did (and he was only going to be able to last so long) and therefore there was no chance of the little one being left out. Honestly I let out a little yelp/sob everytime a bit of hair fell. 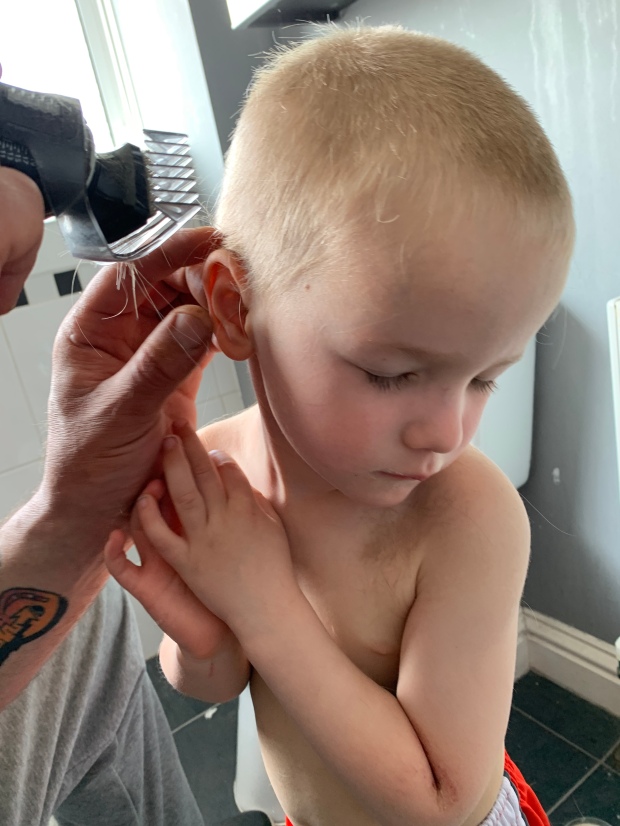 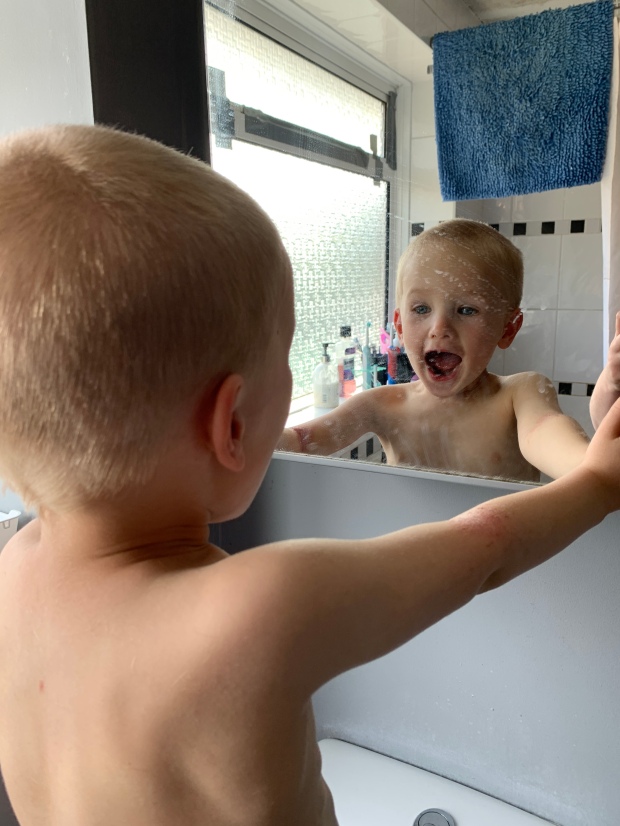 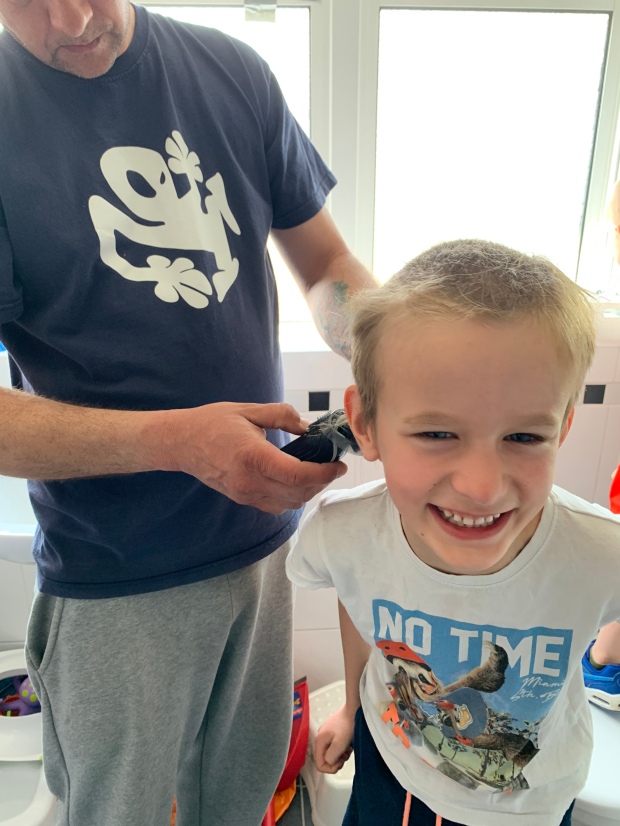 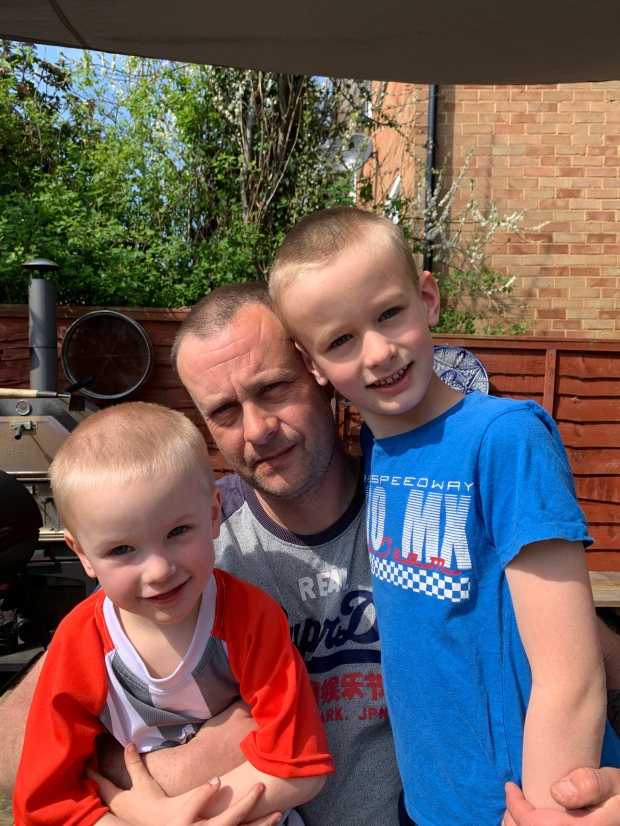 Good job they are all cute!! And that hair grows!!