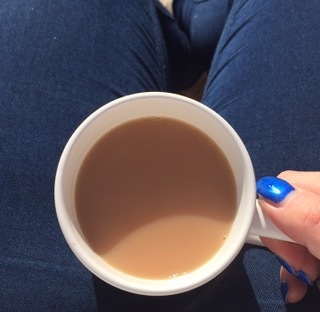 Recently I have been finding everything quite overwhelming and I have been having more bad days than good.  I have wanted to bury my head in the sand and not do anything (though I know that just makes me feel worse).  However a Friend said to me recently you’re doing great just look at the evidence! I wondered what she meant at first, but once she’d explained it made perfect sense and I’ve been trying to cut myself some slack.

The Good Days consist of me getting up without being whacked over the head or having my hair pulled first, either child being the culprit.  LB’s favourite is running in and shouting Mummy’s its morning time! Wow nothing like being dragged from sleep, well me anyway the hubby is usually still snoring away next me. I’d love to be able to wake up before them and spend 15-20 mins downstairs with a hot cup of coffee first, getting myself prepared for the chaos, however every time i think ‘Yes I’m awake before everyone, lets go’ one of them hears me and demands my attention.  LB gets dressed himself and is eager to go to school, meaning teeth are brushed without complaint he puts on his own shoes (which he can do just refuses if i ask him-if i don’t he does it without a spare thought).  He walks, stands on the buggy board or scoots, without complaint, the 20 mins to preschool, we say goodbye with our kiss, cuddle, snuggle, high five song combination  and then i get a wonderful walk back listening to podcasts or music.  I feel refreshed and ready for the day and the fitbit is telling me i’ve almost done half of my 10K steps for the day and i slept for 8hours uninterrupted (Ha I wish).

Once home i snuggle and play with P for a little while before his nap and then once he’s asleep I crack on with some work, which is productive and ticks lots off of the to do list. I enjoy a hot cup of tea/coffee before waking P up for his bottle and then we set off to pick up LB either before or after lunch club depending on the day.  Lunch club days are obviously the best (an extra hour and a half of productivity).  I love my boy and spending time with him but productivity is something that makes me a better person, for sure. The walk back consists of LB telling me all about the fun he has had while stopping to look at anything and everything he spots along the way.  This could be flowers, leaves, creatures, the house that has the tree growing into the side of it or the numbers of houses.  He’s even started saying ‘Mummy thats a 4 and 5 that makes 45’. Very proud Mummy.  He’s so interested in numbers. 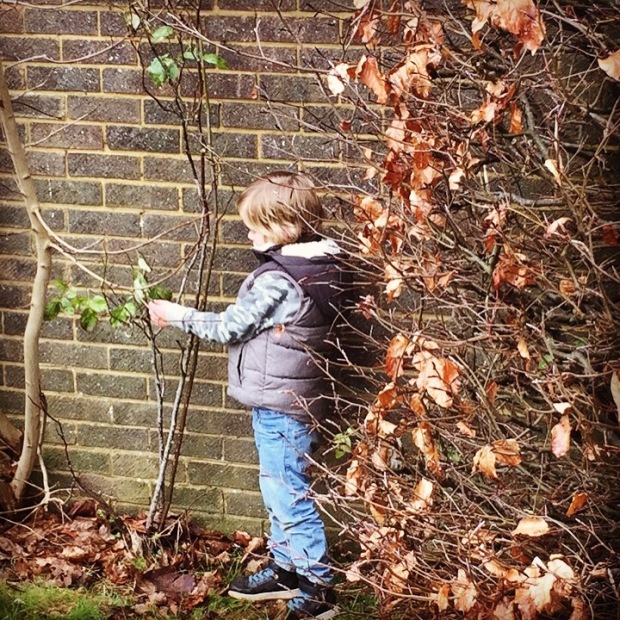 We then come back for a spot of lunch, sometimes stopping at the park across the road first to blow off a little extra steam before playing a game or doing a puzzle.  When P goes down for his afternoon nap we have some quiet time.  I either manage a little bit of blog reading/writing while LB watches a little TV,does some colouring or plays some games on his pad, before we do some tidying up and start cooking dinner.  LB likes to help with these things especially giving anything a good stir.  LB would eat all of his dinner no fuss before he goes off to play a little before bath and bed.  Bath time with both LB and P is a giggle.  P kicks away splashing while LB squirts water with his superhero ducks and asks what sounds his letters make.  He has started to say thats a B for Beau or M for Mummy.  When asked to get out he would do as asked and get himself dressed into his PJs while i sort out P. Teeth would be brushed (properly) without any tantrums eg. when i say you need to brush the same teeth a few times over and you don’t need so much water.  He would then choose his 2 books and allow P to lay next to him in his bed while they cuddle up and I read the stories.  Once We have had our kiss, cuddle, snuggle, hi five good night LB would go to sleep without coming out of his room repetitively to tell me he isn’t tired and doesn’t want to read any books (which is my usual comment).  P would settle first time round (rather than after the 8th time of walking up and down the stairs). I would then get some time to cuddle up with my hubby on the sofa, i wouldn’t feel guilty for not cracking on with some work, cleaning the kitchen or sorting the pile of washing, I’d just enjoy a programme then take an early night to read some of my book, without falling asleep after 2 pages.  P would only wake up once in the night for a bottle and then would sleep through till morning. 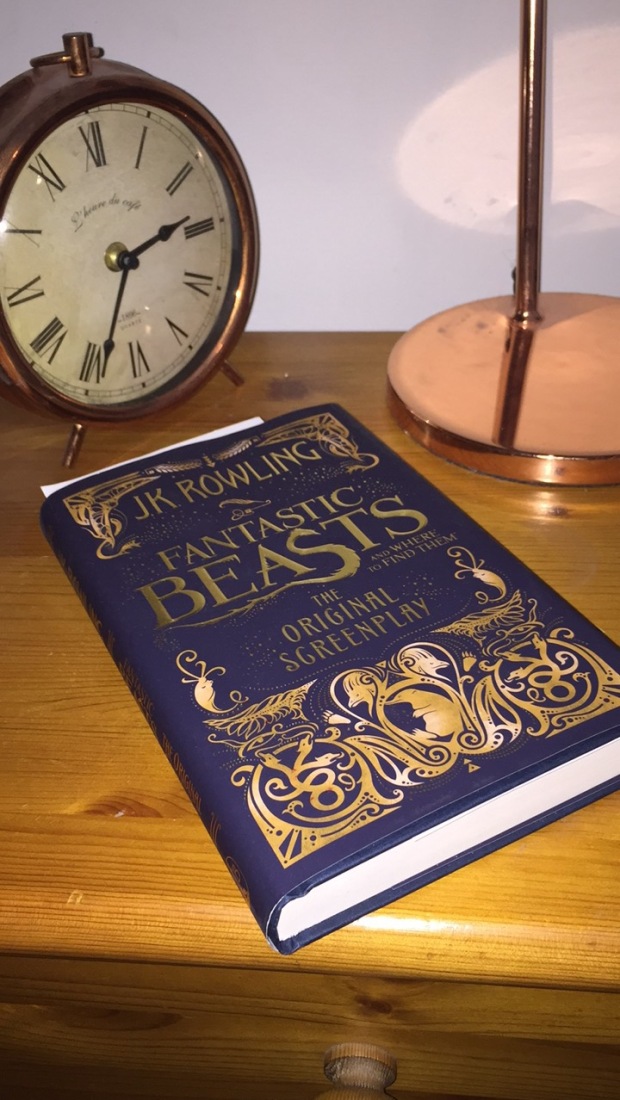 Now is that really too much to ask? Yes? No? Maybe?
Having all of it would be unbelievable but even a few of these things
in the same day would be fabulous.

Recently the Bad Days have over run the good. I have woken up on the wrong side of the bed after being awake so many times throughout the night.  P is teething and this is not helping his nappies either. He screams uncontrollably while i stress about waking everyone up. I’m then up every half hour putting the dummy back in and rubbing his back to try and calm him ( Friday night i had 3.5 hours sleep and had done over 1500 steps before i actually got up in the morning).  LB has run in and jumped on me and instead of grabbing him in for a cuddle I have told him to go away (though he has come in any point between 5-7am recently. We’ve then been in a huge rush and we’ve just bickered.  He does everything at snails pace and refuses to get dressed, even resorting to putting on trousers with no pants or putting his top on upside down (all on purpose-he can get himself dressed no problem).  He then refuses to brush his teeth, won’t pick up his stuff and runs around when I’m trying to get him out of the door.  Then on the walk to school, he dawdles, moans constantly that he’s tired and although he wants to go to school he’ll just stop and i start to lose my temper (i hate being late) Its a 20 minute walk that has taken anything up to an hour.  This then means I don’t get home very quickly, P has a danger nap in the pram on the way home then won’t sleep for me to get any work done and the time i get at home is minimised for my productivity.  The pick up and walk home is not usually a problem as we generally have all the time he wants and i can be a bit more patient.  In the afternoon we have had screaming tantrums over the fact that I won’t let him eat treats before dinner, don’t want him running across the sofa over P’s head, that I’m cooking dinner and can’t play with him immediately and any other reason i have said no.

He has gone from being a hugely polite, patient little boy to rude, demanding and thinks if he says he wants something its a given. It’s so hard not to give in for an easy life at the minute, my hubby has even asked me who’s more stubborn but i don’t want to give in as he thinks he can get his own way no matter his behaviour and i need to teach him discipline.  Its hard as i hate to argue with him, i have tried all sorts from being down at his level explaining a situation, using a naughty step, counting to 3, giving cuddles when he’s screaming at me, tickling to distract-everything! P is teething and therefore we are at the stage where if i put him down or walk out of his sight he screams. So then the big brother jealousy kicks in as it can make it harder for me to do what LB wants.  Dinnertime has turned from an enjoyable time where we all sit down together and explore new foods to a nightmare where he won’t even try it.  He used to eat everything (except mushrooms) tonight he wouldn’t even eat meat, potatoes and veg.  He will then scream at me again because i won’t let him have a teat and go watch TV.  I don’t mind if he tries something but when he won’t even put it in his mouth and your cooking him something fresh every night it gets frustrating.  Theres very little leeway  with him at the minute which means I’m struggling to feel any chill time before he kicks off the next day.

I’m feeling Anxious and Guilty daily.  I never know how my day is going to go, what mood LB is going to pull out on me.  The hubby has been ill this week also so you know the man flu nightmare that has been added. I’m finding it hard to take a deep breath and start each day afresh.  I feel like my house is a mess, my work is not getting done, I’m constantly arguing with my child, trying to get the other one to chill without me having my eyes on him constantly, never getting anytime to myself or sitting with the hubby and the overwhelm has made me feel like i just don’t want to get up in the morning. Though I do and i put on a smile and carry on.

Remembering to look at the evidence like my friend said, is the hard part for me.
It’s easy for me to say this to friends when they need it, show them their strengths, their beauty,  but for some reason I struggle when it comes to me.
My friend said to me when I told her, I just don’t want to get up in the mornings some days, that I should look at the evidence.
I have two beautiful boys who yes may drive me a little insane sometimes but are healthy and safe and beautiful.  I run a business where people come for fun and friendship and love (and after reading a few testimonials from past students recently i can see how much we have meant to them).  I am volunteer choreography to our local Youth Theatre, but trying to do all of this and be the dream housewife and mother no wonder it all seems a bit much some days.

These have been my Ordinary Moments the last few weeks and it has had me feeling disappointed in myself for not being able to snap out of it, or pick myself up.  Guilty that I’m not being the best mummy right now, sad that I’m not getting very much done and then sad that I’m not spending enough time cuddling my boys.
So I wanted to write it down, recognise that I’ve been struggling and look at the evidence.  Tell myself I am doing a good job, that things will get better and sometimes its just important that i get through the day, not that its spectacular one.

This will pass, as every phase does and I just need to remember how grateful I am to have the family and friends that I do. I am blessed!