So here I am 28 + 5 days pregnant.
Officially in the Third Trimester-the home stretch!

Baby Plum is now the size of an aubergine (nearly a butternut squash)
and apparently weighing just over 1kg.

With only just over 11 weeks to go now, the time finally seems to be going faster.
I had told myself that when I hit my friends due date
(Monday-still no baby bless her-in this Heat!) I would start getting organised.

This little baby is a complete wriggler!
I have been feeling it every day for a while now which is great, however over the last couple of weeks we’ve got to the point where B can feel it too and you can see my tummy move.  It completely freaks B out, he doesn’t seem to be one that enjoys feeling it, it just makes him feel like there’s an alien in there. It’s nice now that the movements can be felt everywhere, not just really low down and I love lying there feeling it move in me and knowing it’ll be here before we know it.

It goes completely crazy when I sit down in the evening,
I guess when I’m moving around it gets rocked to sleep.

It feels weird calling it ‘it’ but as we don’t know the sex I’m not sure what else to use.
We call it ‘Plum’ within the family (my cousins started it, as that was the size when I announced my pregnancy) and LB was ‘squidge’.

I am definitely starting to feel the struggle. I can’t see or reach my toes anymore. It’s definitely getting in the way a bit especially when teaching which is going to be fun at summer school for the next 2 weeks 29-31 weeks! Midwife said its measuring quite big at the minute, but we shall see over the next few weeks as now having midwife appointments every 2-3 weeks rather than 12.

Normal continual worries are still there and probably will be until Plum is born
and possibly longer.
How are we going to cope? how is LB going to cope? this really is gonna hurt! Etc etc.

I had my midwife appointment on Tuesday and there would have been a worrying ‘I can’t find the heartbeat’ moment had plum not gone completely crazy as soon as she’d put the heartbeat monitor on my tummy.
The midwife was saying ‘come on we know you’re in there’.

I’ve now had my anti D injection (as I’m A- blood type) and I’m  booked in for GTT testing (as my dad has diabetes) for next week. Man that’s gonna be hard I am an eat late and as soon as I get up girl and I’m not allowed to eat or drink (except water) from 8-9pm the previous night, or before my spot at 9am and prob not until lunchtime. Yikes!

LB is still being so lovely about the baby.  It’s still a boy in his eyes and he’s planning on being a great big brother, helping out and sharing loads.
I was starting to wonder if his recent bad behaviour was because of the baby coming soon and we’ve been discussing it and he has seemed so happy by it all-though i’m sure there’ll be some jealousy.  Well this was all until this morning when he was playing outside and his game seemed to involve repeating the phrase ‘throw the baby over the fence’.
Oh my goodness!!

More people have been commenting on my boobs getting bigger-oh man!

The general sore hips, heartburn and cramp are rearing their ugly heads quite frequently now too. So pillow between the knees at night, gaviscon in the handbag and plenty of stretching for me.

Tiredness has kicked back in too but this could also be to do with the fact that LB is really not doing great at nighttime still. We are on about 6-7 weeks of it and now we are going cold turkey and trying to live with the screams-this makes me so sad!

Sleeping is obviously harder as its been so hot this week, the bump makes me more uncomfortable and i keep waking up on my back and having to flip over.
Also needing the toilet in the night almost always between 2-3 am.

Struggling to get motivated to do anything at the minute,
especially in the afternoons/evenings.
Lots of blog post ideas going around my head, a course i want to get back into,
a house to organise and most certainly clean and all i want to do is lay down. 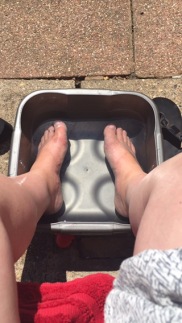 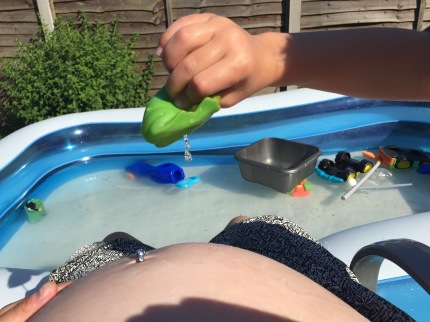 We’ve had to do some cooling off the last few days with feet in the washing up bowl (thinking they may be getting a bit swollen in this heat)
and LB cooling the baby down spraying me with bath toys.
At least the heat has given me an excuse to sit back.

I think we may actually have a full girls name we actually agree on Wowee!!
Though if it is a girl and we look at her and it doesn’t fit, we are screwed. Still working on boys names. We have a few but nothing that fits together really nicely.

People have started to find us out second hand things too,  so I’m slowly gaining some bits and pieces. A friend brought us a colourful crocheted blanket from the local fete the other week which is beautiful and I’m starting to get excited about getting this nursery underway now.  I’m getting the itch to get out all the old baby clothes, get washing it all and putting it away in non existent furniture.

I have whittled changing bags down to a few on Amazon I think this one might be a favourite, but still deciding.  I’ve had a flick through Mothercare’s travel systems and need to get on the IKEA website for some furniture as all of LBs stuff is still in his room apart from the cot. I’m starting to feel a bit excited now actually, Just making these little plans.

Having my own family was always really important to me,
I knew i wanted to be a mum from a young age.

I obviously had no idea how hard it would be
nor how rewarding, mind blowing and heart stopping either.
Seeing my big baby already talking to his little brother or sister in mummy’s tummy
is one of the most beautiful things ever and I just hope
I can be half the mother I have dreamed of being.