Dance has been such a huge part of my life for as long as i can remember.
I started baby ballet when I was about 3 and from the age of 5 started dancing ballet, tap and modern with the school (SF)
that would be my second home up until the age of 18.

For years I did shows, fetes and a lot of fundraising for charities (this also involved abseiling a building with my dance family)
There was rolling around on the grass at school fetes, changing in carparks to perform for the elderly
and being put in ridiculous costumes
(an egyptian snowman and a frog all in one show – and yes i was a teenager!)

We never really did exams though, it was all about the performance
so when i went off to Dance College at 18 and was thrown into Vocational (Intermediate & Advanced) exams
it was bit of a shock, but somehow I seemed to come out with high marks (except maybe the ballet)
I even got a Distinction in My Intermediate National.

After Dance College I went and performed in Newquay as part of the Cabaret team on a campsite.
It was a fab first job as a cabaret singer, children entertainer, bingo caller, dame in panto
and being Dino the Dinosaur in full skins.

In 2003 I went off to Tenerife to perform in a show called Raffles which was a dining show where we were waitresses
who all of a sudden would burst into song and then put on a full costumed 3 part show.
This was possible one of the best 2 years of my young life.
I spent my early 20’s meeting some of the best people (many of who i am still friends with now
-though unfortunately see very little of)
I went over as dance captain and worked up to choreographer of a new show and team leader
(I was not liked for the rehearsals I called) 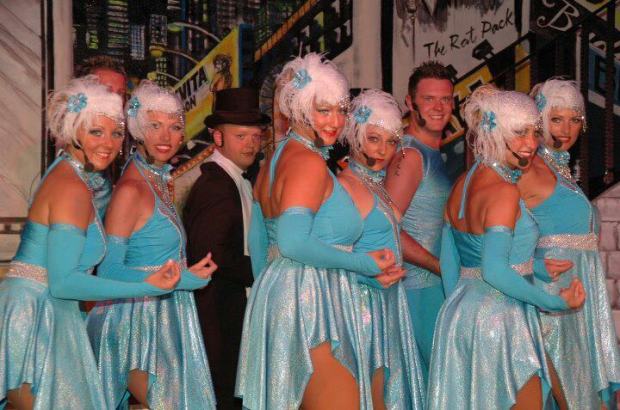 I came back after 2 years for Family reasons and unfortunately while i was spending a few months at home the show closed down.  I was lucky enough to meet B a few months later and he gave me a reason to stay put for a while.  A long while.  I never went off performing again, but i started freelancing as a teacher having gained my ISTD qualifications while at college (A bargaining chip from my parents who said I could only go to dance college if i took my teaching qualifications too
-man am i glad that happened)

I started teaching in a few local schools and the one where i was covering maternity leave originally, became the school i now own and run, Stage Plus.  It cost me a fortune and still does, but is my Baby (8 yrs old now), something that drives me round the bend and stresses me out daily but something i love with all my heart.

Obviously when i went off to College my weeknights spent at SF died off.
I still came back and did the shows and never missed one, even coming back from Tenerife
and learning numbers and doing the show within a week.
I even performed while 7 months pregnant
(rolling around on the floor wasn’t so easy but being dressed as a nun was quite hysterical)

Last year was the first show i missed it was very close to my own schools show and with a toddler
there was too much going on and i couldn’t do it.
I went to watch and thought it was fab but was gutted after 23 years of being with SF I’d finally missed my first show.

Well the next one is July 2016 and on Friday I went back to class.

Now everyone always assumes being a dance teacher, i am fit!
Well let me tell you, in my case, thats a load of rubbish.
Once upon a time i used to be (I taught Zumba until 8 months pregnant),
but since having Little B i really haven’t got back on that band wagon and thats naughty.
However I loved dancing at my recent contemporary course and I realised how hyped i got
and knew i had to do something for myself again.

Well a bit of tap, ballet and modern show dance was learned and I loved it.
My body realised how much work it has to do, but learning someone elses choreography other than my own
and not being in charge was really nice.
So god knows what costume i will be putting on (there is talk of a plc catsuit)
but my red lips and glitter will be coming back out and I can’t wait.

I’m linking up with Katie for our Ordinary Moments x