Today it’s our 4th Wedding Anniversary so I thought I’d take a moment to reminisce….
Me and B have been together 9 years, engaged 6 and married 4…

We met at a local pub where I had gone to meet my dad and sister for a drink
and B had come in with a mutual friends as he was new to the area.
To be honest i fancied him immediately!

We went for a drink, we flirted, we mucked around for about a month before finally going ok let’s go with this….
I had just turned 23 and he was 29.
We were inseparable instantly.

Honestly he is nothing like any of my past boyfriends.
In fact when I asked my dad the question-is he who you’d thought I’d be marrying? 3 days before the wedding
while drunk, having a celebratory father daughter meal, in the Crazy Bear of all places, he answered No……
but apparently he’s never seen anyone look after me or look at me in the way B does.

He proposed while we were at a ball with family and friends, though no one apart from his family knew it was happening then! My parents had been asked but thought it was happening while we were on holiday the following week!
He completely stunned me and I don’t think I actually ever said yes.
My words were ‘are you joking?’ and he said ‘does it look like it!’
As I hugged him, out ran Bs mum and sister who had been stopping everyone coming out for a cigarette
because they knew what was going on.

The dress was the first one I saw in a magazine, 2 days after the proposal on the plane to Corfu!
It really was love at first sight and still now when I look at pictures I think YES!! 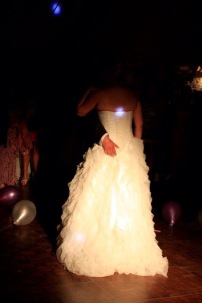 The night before the wedding I went and stayed in a hotel with my mum.
I was awake stupidly early, as I’m sure every bride is,
but it was like all the worry and nerves about everything going right, disappeared.
I knew I was making the right choice for me for the rest of my life and as long as B was there with me the day would be perfect!

We got married in a beautiful barn, with fairy lights and my favourite flowers Cala lilies!
We had goldfish as centre pieces and cheesecake and cupcakes for dessert!
A hog roast I never got to eat
and my best friends and family surrounding us!
It was simply perfect in every way!

Our 4 years of marriage have seen a new baby, a house move, deaths in the family, financial struggles
yet so much love and support!
I don’t think I could get through a day without knowing he was there for me.

We have our vows printed and in a frame on the wall
and last night before bed I stopped and read them for the first time in a while!
They made me think about the special promises we had made to each other
and how we have stuck by them ever since
(most of the time)
I truly hope we can be like my grandparents, still happily married and soppy with each other.
it’s beautiful!

Here’s to many more years together..