My stepmum and I did the colour obstacle run on Sunday.
I’ve wanted to do one for ages, but the ones I kept finding were London or Brighton and I keep thinking,
it would just be so much easier if closer.
We were supposed to be doing one at the park right next to my flat a few weeks ago, but unfortunately it got cancelled.
My stepmum managed to grab 2 tickets off of someone for this local one, as it was originally fully booked, so we got a gorgeous sunny day at Dorney Lake.

Now I’m not fit!
People assume I am, as a dance teacher
but I spend a lot more time talking and putting bodies into position rather than dong the actual exercise myself.
Especially since having Little B I’ve let myself go a lot and am quite overweight and in need of pushing myself, so with the nuts challenge 7k in a few weeks the colour 5k was a great start!

In the build up to the nuts challenge I have built up to run 5k and walked 7k.  Adding the obstacles too was fun but tough, especially in the heat!
Not so fun when I bounced off the end of an inflatable slide and bashed my knee (not being able to walk the next day as I couldn’t bend my leg) however! Or when I had to walk into Tesco like this for emergency nappies!

It was a 5 km run, though to be honest most people seemed to be walking.
We managed to run about half, as then the gaps in between the obstacles was a little small and we had to queue.
I was pretty knackered at points though.
The obstacles consisted of some really silly ones like a ‘rave tent’ which had a strobe light in and we were meant to dance around, but we just walked in and out of a tent and then got some paint thrown at us.
But the inflatable ones were cool-climbing up and slding down a massive bouncy castle basically.
Some it was quite hard to get up and we watched a lot of people slip back down,
before it was our turn making us a little bit scared! 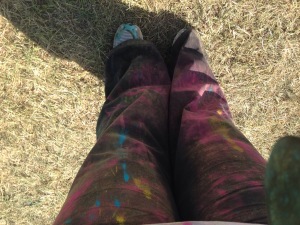 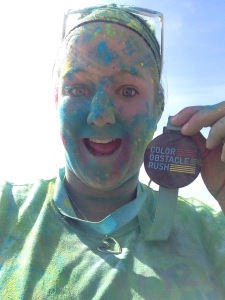 It really was a giggle and something I think of doing but rarely actually get out there and do,
so really pleased I got to enjoy it and on such a lovely day!
Slightly panicking about the Nuts Challenge now though! EEK!

One thought on “Colour Obstacle Run”